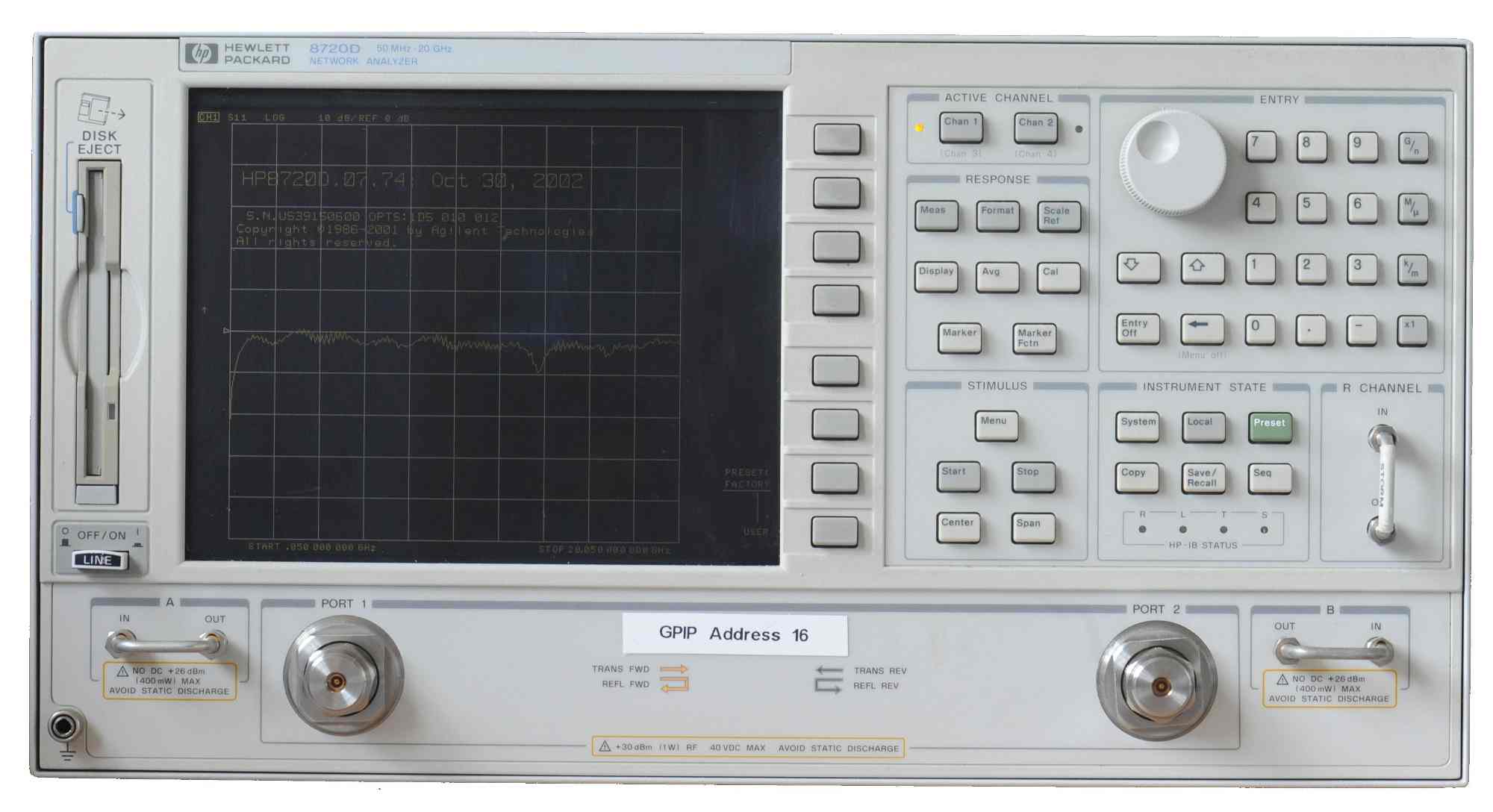 Much of the development of the short open load thru (SOLT) vector network analyzer calibration kits was performed with the aid of an 8720D, so this analyzer is well known to Kirkby Microwave. We are well used to setting up, configuring and using the 8719/8720/8722 series of instruments to use our VNA calibration and verification kits. Although the 85054 type-N calibration kit can be ordered up to 18 GHz, the model 85033 SMA calibration kit has a maximum frequency of 12 GHz, so does not extend to the full frequency range of the 8719 (13.5 GHz), 8720 (20 GHz), or 8722 (40 GHz) series instruments.

Depending on model, three or four of these methods will work.

You should have the following files visible on a disk for the 85033 SMA calibration kit:

You should have the following files visible on a disk for the 85054 N calibration kit:

Once you have the floppy disk with the correct files, the method is:

At this point, assuming your floppy drive still works, you should get a list of the files on the floppy. Pick the one for the kit. The name should be obvious. For example, for our SMA kit, it will be SMA or KM85033. For the N kit it will be KM85054. For other kits, the names should be obvious. You can store multiple kits on the same disk. Each entry has several files, which you can see on a PC, but will not see on a VNA.

that will then load the coefficients into the USER kit. When the VNA is powered off, assuming the super capacitor (supercap) (early models) or battery (later models) is ok, the contents of the user defined calibration kit will be stored. There should be no need to load them again. Note however that when the instrument is rebooted, either via pressing the PRESET button or by powering it off, the calibration kit will revert to the default for that instrument.

Although we have never used it outselves, being Unix fans, and not Windows fans, the Windows based GPIB toolkit has a number of useful features for test equipment. One is a program called vna.exe, which can manipulate calibration kit files, as well as save Touchstone files.

Method #4 - Writing your own software to upload the coefficients.

If you look at the programming manual for the VNA, you will see that there are various commands to set up calibration kits. Below are a list of commands which were used to set up a custom calibration kit on one particular VNA. The basic procedure is

You should be able to see this happening in the code below, but this is only an example of the sort of things your own software might do, and some of the command may not be supported by your instrument anyway. You need to read the programming manual.

If possible, it is much easier to enter a calibration kit via GPIB or a floppy disk, but if you don't have that facility, then you must define it manually. The manual for the VNA needs to be consulated carefully, but an outline of the procedure is given below, where on modifies one of the internal kits and saves it as a USER kit. That is much easier than trying to define the kit from scratch. By re-defining a suitable calibration kit, you can avoid having to worry about CLASS ASSIGMNMENTS, and only concern yourself with changing the standard definitions. So an outline of the procedure is as follows. These photographs were taken from an HP 8720D VNA with 7.74 firmware, but an 8753ES with the same firmware versions shows almost identical behaviour. Different VNAs and different firmware versions might change the menu structure a little, but this should indicate the process.

Some standards are easier than others to define, as they have less parameters. In order of complexity, from the simplest to the most complicated, we have

Since the opens are the most complicated things to define, this tutorial will define an open standard. The shorts and loads only have a subset of the parameters of the opens.